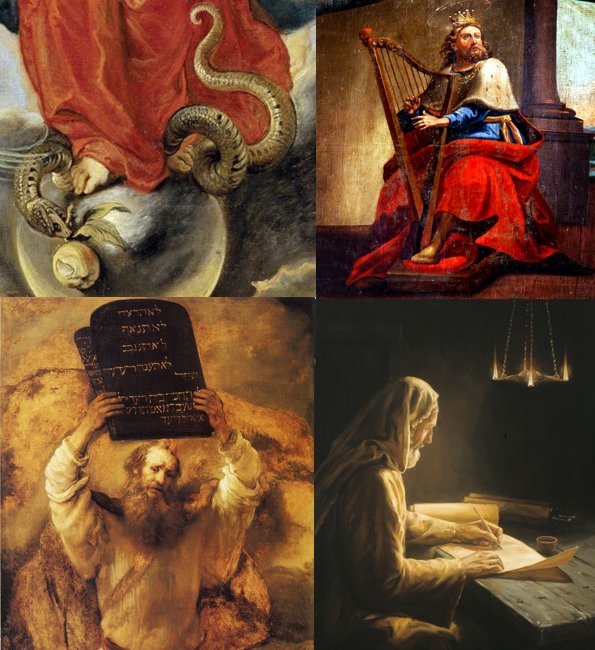 Luke 24:27 “Beginning with Moses and all the prophets he explained to them what was said in all the Scriptures concerning himself.”

I have often wished that Luke preserved this sermon Jesus preached to a couple of depressed disciples Easter evening. I wish he had written it down for us to read.

But then, Luke didn’t have to. It is already written across the pages of the Old Testament. Jesus was simply taking these men on a tour through the words recorded there. He expected that they were clear enough for any honest disciple to understand them, if he just bothered to read them.

Jesus began with Moses. No doubt that means he began with the very first gospel promise in Genesis 3:15. “I will put enmity between you and the woman, and between your offspring and hers. He will crush your head, and you will strike his heal.” The words were directed against Satan on the day the human race fell. Jesus is the offspring of the woman who would suffer when Satan struck him. It would be painful–heal pain can be crippling. But Jesus is the one who would do the crushing.

From there he likely went on to the promises to Abraham, Isaac, and Jacob; Moses’ promise of a future prophet like himself; the many Psalms of David that describe Jesus’ person and work; the suffering servant in Isaiah 53; the many descriptions of Holy Week in the Prophet Zechariah.

Isaiah’s 53rd chapter probably deserves special mention. Did you know that this chapter is no longer read in Jewish synagogues today? Some people call it “The Forbidden Chapter.” How can you miss the references to Jesus’ suffering, “He was despised and rejected by men, a man of sorrows, and familiar with suffering;” his willing death, “he was led like a lamb to the slaughter, and as a sheep before his shearers is silent, so he did not open his mouth;” the substitutionary purpose of his death, paying the penalty for our own sins, “But he was pierced for our transgressions, he was crushed for our iniquities;” and finally, his resurrection to life, “though the Lord makes his life a guilt offering, he will see his offspring and prolong his days, and the will of the Lord will prosper in his hand. After the suffering of his soul, he will see the light of life and be satisfied”?

So Jesus opened the eyes of these men. In doing so he turned their lives upside down. All their old hopes and dreams were crushed. But in their place they found a God and Savior who loved them beyond imagination. Every sin was forgiven. Every demand and requirement of God was fulfilled. Their relationship with God was fully reconciled. The journey back to God’s good graces was complete. Life would never end. Heaven was guaranteed. No wonder they asked each other after they recognized Jesus at the end of the evening and he disappeared, “Were not our hearts burning within us while he talked with us on the road and opened the Scriptures to us?”

Do you know what happens when God opens our eyes and we see our risen Lord in his word? We trade the garbage we have created with our lives, and the garbage we have planned for our lives, for real treasure. Then we see that the impressive education, and perfect family, and successful career, and healthy life and happy retirement aren’t all that important. Whether I travel the world, or develop a stellar reputation, or build great wealth doesn’t really matter. To borrow a phrase from Paul, “I consider everything a loss compared to the surpassing greatness of knowing Christ Jesus my Lord, for whose sake I have lost all things. I consider them rubbish that I may gain Christ and be found in him” (Philippians 3:8-9). To borrow a picture from C.S. Lewis, we stop acting like the little children at the beach playing in the trash, fascinated by the broken pieces of glass, when God has placed before us the golden sands and magnificent ocean of his grace in the kingdom of the Son he loves. Open our eyes, Risen Lord! Let us see you in your word.