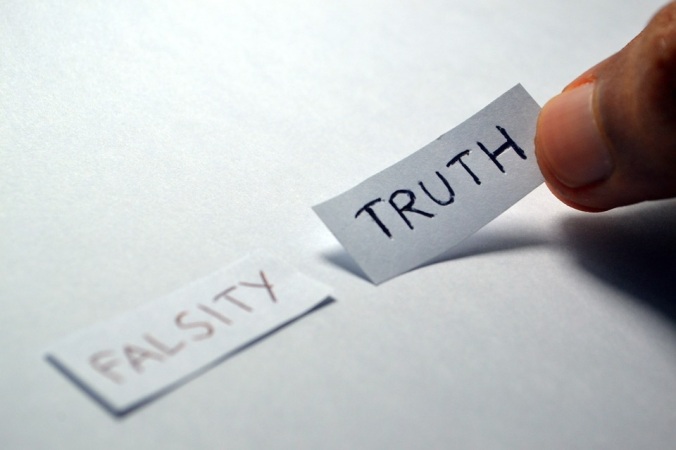 How would you complete the following sentence?

If you answered “a” to the statement above, congratulations! You stand with the vast majority of Americans. In a survey already 15 years old, nearly 80% of Americans rejected the idea of absolute truth. Nearly 70% of so-called “born again” Christians reject the concept. Most of our fellow citizens have made peace with living in unending uncertainty that anything is true.

If, on the other hand, you believe Jesus when he tells us, “If you hold to my teaching, you are really my disciples. Then you will know the truth, and the truth will set you free” (John 8:31-32); “I am the way, and the truth, and the life” (John 14:6); then you know that the Christian Church is facing a big problem. Undoubtedly Jesus was referring especially to the truth about grace and forgiveness through him. That doesn’t mean he can be safely ignored on issues of right or wrong. Read the Sermon on the Mount again (Matthew 5-7) and see if Jesus doesn’t make absolute truth claims regarding moral issues.

One of the most compelling arguments against believing that absolute truth exists is the history of cruelty, even bloodshed, by those who thought they possessed it. Religious wars of various sorts–the Crusades, the Inquisition, and now the rise of fundamentalist Islamic terrorism–are all attributed to belief in absolute truth. The violent actions of some of today’s polarized political partisans, left and right, suggests that people can still become infected with this disease.

The question is: Does the problem of violence in the name of truth stem from the concept of truth itself? Or is it rather a symptom of the corruption of  mankind, one that always finds ways to twist and pervert good things for evil ends? Does the truth have to make men mean?

The absolute, non-negotiable truth that Jesus taught always centered in love. Keeping the commandments of Christianity has never been mere rule keeping. The commandments of the Bible teach us to behave in a way that serves and loves my neighbor. Caring about God and caring for others is at the heart of the absolute moral truth of our faith. This is not a sentimental niceness or socially acceptable politeness that rules out all rebuke and confrontation. But because it keeps the focus on helping my neighbor, it counteracts the heartless self-righteousness and sometimes violent condemnation that have marked so many moralists throughout the centuries.

The absolute, non-negotiable truth that Jesus taught also sets the standard of goodness far above what even the most selfless and devout people can attain. It is meant to be taken straight without any water added. When it is, it does a wonderful job of humbling even the proudest hearts. Those who are kept aware of their own sinful shortcomings are less likely to lash out at fellow strugglers in an unloving way.

Only those who know God’s absolute moral truth in this way can appreciate the truth that sets us free: in Jesus life and death both my self-indulgent immorality and my self-righteous cruelty find full and free forgiveness. That God is love, that the blood of Jesus Christ his Son cleanses us from all sin, and that this good news is the power of God for the salvation of all who believe takes on life and meaning in my heart when that heart is overcome, not by doubt, but by certainty that all of this is true.

Certainly there are things that we cannot know for certain, things God has not chosen to reveal. But where he has spoken we can be sure that there is no truth so small that it is unimportant, so insignificant that we can overlook or ignore it. Don’t be ashamed to stand up for the truth Jesus has given us. The health and future of our faith depend on it.