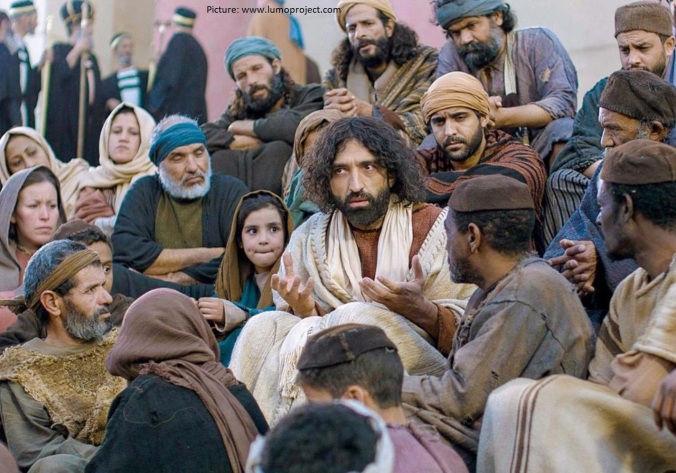 Mark 3:20-21 “Then Jesus entered a house and again a crowd gathered, so that he and his disciples were not even able to eat. When his family heard about this, they went to take charge of him, for they said, ‘He is out of his mind.’”

Can you love your neighbor too much–not romantic love or selfish desire, but true, self-sacrificing love that only does what is best for others? Is it possible to love others that way beyond the bounds of sanity? Some members of Jesus’ own family thought so. They thought Jesus was crazy for spending so much time with the crowds.

Why did they think Jesus had gone too far? He was working so hard that he didn’t even have time to eat. But he wasn’t a workaholic addicted to his job, the kind of person who gets the jitters if he isn’t doing something productive. He wasn’t a slave to money or gadgets or the finer things who never stops working because he never has enough.

Jesus understood, like no one else ever has, that life is serving. In this case, Jesus was fasting not for some mystic religious exercise to bring him closer to God. He skipped meals because his neighbor needed him. We aren’t told specifically on this occasion, but when crowds surrounded Jesus, that usually meant he was doing one of two things: either he was showing mercy by healing their diseases and driving out demons, or he was proclaiming the love of God in the gospel of grace.

When Jesus saw the crowds, we read in Matthew’s gospel, he had compassion on them, because they were harassed and helpless, like sheep without a shepherd. They suffered all the physical misery and pain that is common to people who live in the world. And in Jesus’ day, all their religious leaders were far more interested in burdening them with huge lists of rules to keep than offering the smallest drop of God’s forgiveness. Jesus gave these people the time they needed, so that he could give them the grace they needed, even if that meant skipping dinner more than a few times.

For this, his family decided he was out of his mind. Do our own sympathies sometimes lie with their point of view? What is the point of sacrificing my time, my convenience, my energy, my comfort, or even my health for others when there is no obvious benefit for me? Why help someone else when it makes my own life less pleasant? The answer: that’s what love is.

In Paul’s great description of love in 1 Corinthians 13, he says among other things, “Love is kind…it is not self-seeking.” Parents do it for their children–sacrifice with no immediate benefit to themselves–at least much of the time. Why should it stop there? “As we have opportunity, let us do good to all men, especially to those who belong to the family of believers.” Any other view is just another version of worldly selfishness.

Our criticism of sacrificial love at work, our refusal to practice it ourselves, only exposes our selfish nature. The world knows only a “love” that expects something in return. I know of a celebrity fund raiser that once raised $100,000 dollars for underprivileged children. That’s wonderful. But nearly $800,000 was spent entertaining the celebrities in attendance to raise the $100,000. I don’t want to be critical of the good. But Jesus shows us a better way. Jesus shows us love. And love should not be criticized.

Jesus’ love is always first a love to be received. That’s what the crowds were doing who came to him. That is why we have placed our faith in him. He has loved us no less sacrificially. He has given us more than his time. He has given us his very life. That’s not crazy. That’s what God’s love looks like.

One thought on “Not a Crazy Love”