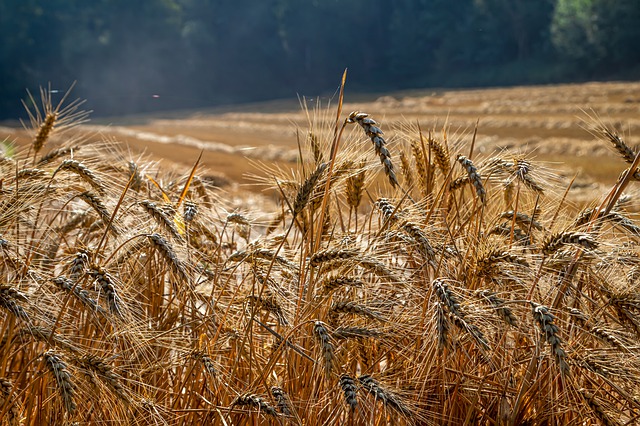 Deuteronomy 16:9-10 “Count off seven weeks from the time you begin to put the sickle to the standing grain. Then celebrate the Feast of Weeks to the Lord your God…”

The climate in our country means that we harvest grain and give thanks to God in the fall. The climate in Israel meant that all this took place in the spring. At about the same time that the people would be finishing their harvest of wheat and barley, seven weeks after it had started, the Lord commanded them to celebrate a Feast to him. Since the Promised Land was a land “flowing with milk and honey,” they would have a reason to celebrate. Unlike the desert in which they had lived in Egypt, parts of Israel were lush and fertile. This land kept them richly fed.

But there was another reason for Israel to celebrate a Feast to the Lord when they gathered in the harvest. There was a certain predictability to the harvests in Egypt. In addition to the annual flooding of the Nile, man-made irrigation systems kept the fields watered. The promised land, on the other hand, relied upon the rains for water. No “human engineering” could change the rainfall. The farmers among God’s people simply had to rely upon the Lord to send them rain. They were at God’s mercy for the success of their harvest. And when God had been so merciful, their reason for thanking him was impressed upon them more.

God wanted this gathering in of his harvest to lead Israel to do more than look back. As they took a day to celebrate the harvest, he wanted them to look ahead as well. The prophet Jeremiah spoke of the Lord gathering the people of Israel to himself as the first fruits of his harvest. The last chapter of Isaiah describes the Lord gathering the nations together as his people like Jewish farmers bringing their grain offerings to the temple.

Jesus picked up these same pictures in his ministry. He told his disciples in Matthew 9, “The harvest is plentiful, but the workers are few. Ask the Lord of the harvest, therefore to send out workers into his harvest field.” After talking to the Samaritan woman in John 4, he also told them: “I tell you, open your eyes and look at the fields! They are ripe for harvest. Even now the reaper draws his wages, even now he harvests the crop for eternal life…” An even greater harvest than the grain harvest was the harvest of souls the Lord wanted his people to bring in.

At no time did God make the full meaning of this harvest festival more clear than when he chose this day of Pentecost to give Jesus’ disciples the Holy Spirit and begin the Church’s work of harvesting souls. That first day in Acts 2, Peter’s sermon harvested 3000 souls for God’s kingdom. It’s clear that God wanted the gathering of his gifts of grain to presage Christ’s commission to take the gospel to all the world and bring souls to faith.

We still associate the harvest of our food with God’s harvest of souls. Today, we are still living in the fulfillment of this Feast of Weeks or Pentecost. When Jesus gave his life for our sins at the cross, that was a one-time event. We look back at work done. But he continues to extend his mission to harvest souls through our mission work today.

Advent, the weeks leading to Christmas, gives us a prime opportunity to do just that. What better time to invite a friend to church? Everyone can sing the Christmas carols.  Luke chapter 2 is popular with the general public. At what other time of the year (with the exception of Easter) is the message that God so loved us that he was willing to go to extreme lengths to save us more clear?

Our journey back in time to the Feast of Pentecost provides a timely reminder, as Christmas approaches, that we are still gathering God’s harvest of souls.