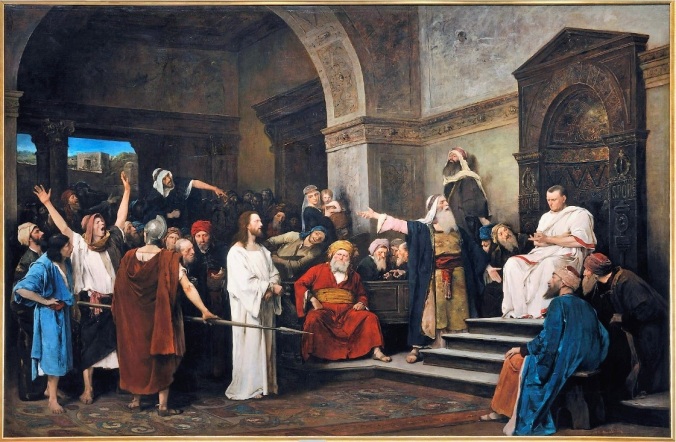 John 19:6-7 “As soon as the chief priests and their officials saw him, they shouted, ‘Crucify! Crucify!” But Pilate answered, ‘You take him and crucify him. As for me, I find no basis for a charge against him.’ The Jews insisted, ‘We have a law, and according to that law he must die, because he claimed to be the Son of God.’”

The chief priests and Jewish leaders had been complaining about Jesus’ claim to be king. Now they come to the real issue. They didn’t care about the Roman government. They believed that Jesus was guilty of blasphemy by claiming to be the Son of God. Obviously they would not have been so vexed if Jesus meant that he was merely a son of God, a believer, an Israelite. But that’s not what he meant, and that’s not what anyone understood him to say. He claimed to be the Son of God.

Jesus made no secret of his divine identity. In John 8 the Jews tried to stone him after he told them, “I tell you the truth, before Abraham was born, I Am,” identifying himself with the Lord who appeared to Moses in the burning bush on Mount Sinai. Less than a year later, Jesus was in Jerusalem for the Feast of Dedication and made the claim, “I and the Father are one.” The Apostle John tells us, “Again the Jews picked up stones to stone him, but Jesus said to them, ‘I have shown you many great miracles from the Father. For which of these do you stone me?’ ‘We are not stoning you for any of these,’ replied the Jews, ‘but for blasphemy, because you, a mere man, claim to be God.” His claims to be the Son of God inspired their calls for his death.

Jesus’ claims to be the Son of God still make people see red. Why are Christian missionaries put to death in certain parts of the world? It is not because of the humanitarian aid that they bring. It is not because they preach Jesus as a nice guy who teaches us to love our neighbor. It’s because they preach Jesus as the Son of God. That truth confronts the falseness and futility of the gods they have set up for themselves. If they can’t kill the leader, they will kill his messengers.

Why have people been fleeing the Christian faith in the United States, making those who identify as “Nones” (no religion) the fastest growing “religious” group? Western Europe is all but completely dark and secular. It’s not because Jesus claimed to be nice, or wise. He claimed to be the Son of God. That leaves no room for my own ideas about sexual choices, priorities, or my own claims to goodness and decency. The more we have rejected his claims on our time, our behavior, and our beliefs, the more we have called for him to die as a part of our lives. In every age, the problem with humanity is the same: when the real God shows up, they call for his death. They want him out of their lives, whether literally or metaphorically.

The bare fact that Jesus is the Son of God, however, calls for our trust, just because of who he is. Once you find the true God, does it make sense to follow any other?

Look again at the scene in Pilate’s court. The Son of God stands before the governor. He can create the universe out of words, send down fire from heaven, control the winds and the seas, and bring the dead back to life. He has control over the chief priests, the Romans, and each of us as well.

But what does he look like? He is a man, and a rather humiliated man at that. He stands there soaked in his own blood. He endures the insults of Jewish official and Roman governor alike. His own people are calling for his death because he claims to be who he is: the Son of God. The governor values Jesus’ life less than the governor’s own political career. It is more convenient, less of an interruption to his day, to let Jesus be killed. Jesus doesn’t speak in his own defense. He does not plead for justice. He does not power his way out of the predicament. The Son of God endures it all, and then crucifixion and death.

Why? This is how much he loves you. This is how intent he is to see your sins forgiven, your soul redeemed, your heaven secured. You won’t find love like that from any of the gods in any of the holy books in any of the world’s other religions, even if they were something more than myth. Only here. Only Jesus. “He claims to be the Son of God,” they say, and he is. And the fact that he endures so much to save you invites our faith in his grace.